The first half of 2017 is over, and my book remained almost unchanged from the end of 1Q 2017 to the end of June. I maintain my defensive stance, risking one-third of my usual sizing for any new positions and also gunning for lowly-correlated positions in terms of price structure as well as fundamental logic.

Over the quarter, we observed that pro-EU centrist politicians (like Meneer Rutte and Monsieur Macron) have prevailed against their so-called populist rivals in key elections, and their victories have spurred on risk appetite and investor sentiment. European bourses marched higher over the past 2 months, and the Euro is now everyone’s favourite currency – what a difference from 6 or 7 months ago!

I went long the Portugese equity market (via PGAL) at the start of April, and so far the position is in the money. I’m looking to selectively add on more risk in the European equity market, which I believe has slightly more room to run, at least until the next bout of political uncertainty hits markets again or any exogenous shock. While the price action of Greek stocks look interesting, I’m inclined to go for Italian stocks, either via an ETF or via these 2 companies which have great thematic drivers behind them: Leonardo (LDO:IM) & Fincantieri (FTCM:IM).

I took a small loss and got out of Videocon d2H as its price hit my risk point, and may re-initiate a position some time in the future again depending on the situation and its fundamental story. As for GAIAM Inc, I added to the position in May as its price continues to consolidate. Both stock ideas were from the Macro Ops community which I have the great privilege of being a part of.

I took a small bet against mining stocks at the start of May alongside a small short against a Canadian bank on the expectation of the continued deleveraging in China impacting these areas. Both bets did not work out well and I stuck to the plan of staying nimble with these plays, taking the losses and moving on. I may revisit the Canada theme again in the near-future as it’s inevitable that their epic housing bubble has to deflate.

In the global currency markets, while I developed the conviction that the Czech central bank will depeg the Czech Koruna (CZK) away from the Euro (EUR) as mentioned here, I wasn’t able to monetise on the idea as the timing of the move was unexpected. I did learn something from this experience, and it is that markets are slow to price in changes in macro-fundamentals, particularly in currency markets. The CZK had to strengthen as inflationary pressures build beyond policy-makers’ targets, and this is despite the large speculative buying (and later profit-taking) of the CZK. I could have initiated a short EURCZK (long CZK against the EUR) after the strong rebound (CZK selling off) in the FX pair following the announcement.

I went long the Mexican Peso against the US Dollar (MXN/USD) in late-May, and while the position is in the money, I’m looking to get out of it soon as speculative positioning in the MXN is extremely lopsided to the long side. I also went long the EUR against the British Pound (GBP) at the end of May, and long the EUR against the Japanese Yen (JPY) last week. Both trades were entered on the basis of speculators betting on changes in political developments as well as sentiment driven, and so far they have worked out well and I’m looking to slowly scale out of them. 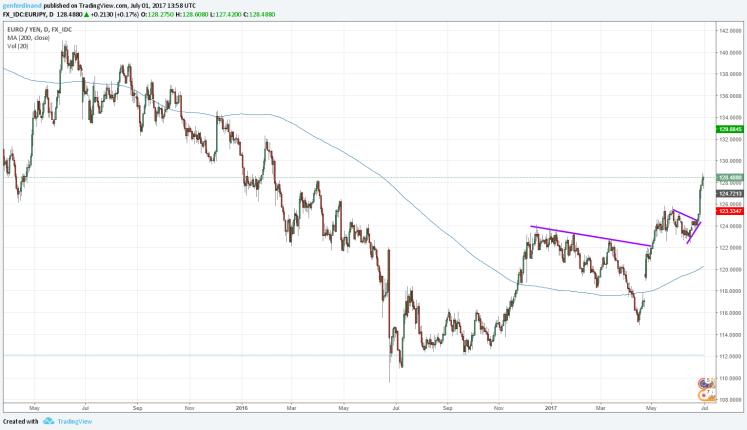 The volatility regime continues to remain the same from the second half of last year, whereby the futures market remains in contango and overall volatility continues to stay suppressed. This is inspite of the recent sell-off among the so-called ‘FAAMGS’ or tech giants in June. It remains to be seen if the ‘dips would be bought’ given current market conditions.

So here’s what I’m looking at for cues for the next quarter and beyond:

McKinsey’s snapshot of surveys of global conditions provide an insightful overview of what’s bothering the minds of major business leaders around the world.

Concerns have increased over geopolitical instability, particularly in the Middle East, as well as terrorist attacks. Corporate executives have expressed their concern that these issues could derail growth prospects and affect their businesses. I will be diving into 19th century history to understand how geopolitical risk could affect financial markets, and perhaps do up a post about my findings on it…

There are less people worried about a slowdown in China now, and the idea behind this belief is that Beijing will continue to ensure that everything goes smoothly due to the all-important leadership transition expected to take place by the year’s end. While there is some logical validity in that, I do think its important to still keep a watchful eye on the Red Dragon. For some time now, Chinese policy-makers have been walking a tightrope, fumbling between deleveraging and tightening policy and prioritising growth, while rebalancing to a consumption-driven economy and at the same time fighting asset bubbles on the mainland. It is a tall order, and because of that, the Chinese financial markets are increasingly policy-driven. 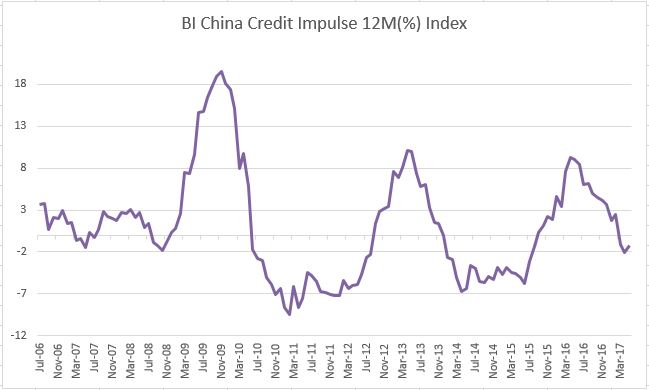 The credit impulse is one way to gauge momentum in China. It is defined as the new credit as a percentage of GDP, and acts as a gauge of the boost that lending is providing to growth. The components include total social financing (TSF) flows, net equity issuance and local government debt issuance. Based of the index constructed by Bloomberg as shown above, deleveraging efforts and monetary tightening have had some effects on growth since the second half of last year, and what matters to asset markets moving forward is if policy-makers start to ease the pressure to ensure growth momentum is maintained. I suspect they may start to lighten up pressure on the pedal in the third quarter, which means that I may actually play along and add Chinese-related plays to the book. This also will have broader implications for emerging markets in Asia and beyond.

I’m getting more optimistic on Vietnam, and may take a position soon. Despite all the talk about how TPP has not transpired, GDP growth has been robust, and their exports have steadily picked up over the past few quarters. More importantly, here’s what I like about Vietnam: 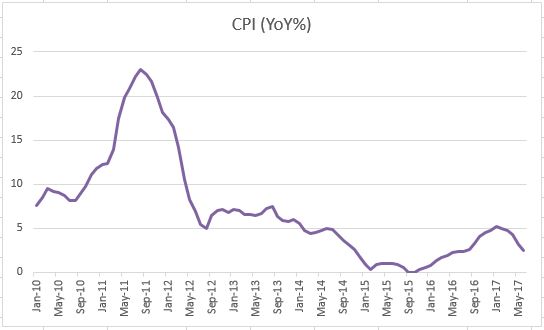 Disinflationary pressures have continued from 4 years ago since the devaluation episode. This is important as it anchors inflation expectations, allowing both corporations and consumers to go about with their daily activities and for investment and spending to gradually rise, fueling growth. Industrial production and manufacturing momentum has been on a steady uptrend. Foreign-direct investment (FDI) continues to pour into Vietnam as wages across other emerging Asian countries are higher, as shown in this 2015 chart from CLSA: 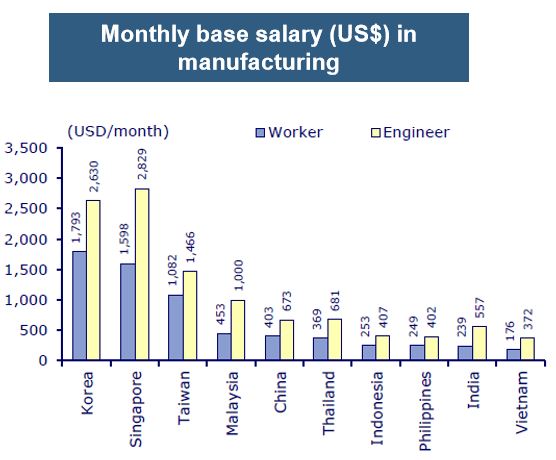 Vietnam has great demographics relative to other Asian countries in the region, and urbanisation rates are coming off from a low base and looks set to continue, which means consumption in the country has a bright future. Here’s a chart of the db x-trackers Vietnam ETF listed on the SGX:

I’m also considering Burma (Myanmar), as the frontier market continue to integrate itself into the global economy and attract FDI. 2 dedicated small-cap equity plays to play Burma that I’m considering is Yoma (Z59) and Singapore Myanmar Investco (Y45). They were once popular when Burma first opened their doors, but I like the fact that no one is talking about them now and how some institutional investors have backed them. Their micro fundamentals are not entirely fantastic, but they are niche and allow one to express a macro bet on the country.

In the global currency markets, I’m digging into Scandinavia, and may blog separately on Sweden and the Swedish Krona (SEK), as I’m of the opinion that the macro landscape is changing over there. I’m developing a bullish bias on the SEK, and here’s a chart of the SEK’s trade-weighted index and real effective exchange rate (REER) from Morgan Stanley and the Bank of International Settlements (BIS) over the years:

I’m also looking for opportunities across the soft commodities space. It’s been a tough market to trade. I was right on the price direction of rice and wheat, but I wasn’t able to capitalise on those trends.

Rice futures have rallied strongly, and I’m just watching the space as I’m digging around production and demand trends around here in Southeast Asia.

On the other hand, I was too early on wheat and missed the latest spike in futures prices:

I like the price action on wheat’s higher time frames. This is an area I’m closely tracking as the industry has been plagued by years of glut, and critically, everyone is conditioned to low wheat prices….

I’m also looking at coffee (Arabica) and sugar, which are back in their own bear markets. To understand both commodities, one has to understand what’s going on in Latin America, particularly in Brazil, as that country is a large sugar and coffee producer. Additionally speculators are all but overwhelmingly short both commodities as seen in futures positioning, which is great for a contrarian bet on the long side when things seem to be picking up. The overall direction of the USD is also key It’s definitely too early to go long, so patience is required.

Capital preservation remains my foremost priority at this juncture, and as such, I’m maintaining my current portfolio strategy of sitting on a large proportion of cash and taking on a series of high reward/risk bets that are as lowly correlated to each other as possible.

With much of the world struggling with growth as their long term debt cycles mature and with geopolitical instability on the rise, it’s prudent that we move away from a ridiculous ‘buy-and-hold’ mentality and an outright long beta approach.

By being defensive when I have a low conviction, I can save my ammunition for the high-conviction, ‘fat pitches’ that come my way when they do. The sort of bets that would really make a difference to the overall portfolio’s returns…