In April this year, local US media reported that the Kentucky Coal Museum is opting for solar power usage, in what may go down as an ironic and perhaps iconic twist in the history of fossil fuels and the global energy industry. 80 or so solar panels are to be installed, with the expectation of saving up to an estimated US$ 8000 in annual electricity bills.

It may seem unbelievable and even downright laughable that this has happened. However, what we see in Kentucky in America is a microcosm of the big picture energy dynamics at work now throughout the world.

Coal has been under assault from its fossil fuel peers at least since a decade earlier, competing with her fossil fuel peers like natural gas prices as well as shale energy as their costs fell. Many manufacturers in both North America and Europe have relied on natural gas and have gradually moved away from coal. Additionally, the unified will of politicians globally to reduce carbon emissions and pollution and to ramp up environmental conservation have also had a double whammy effect on the coal industry as governments roll out various measures to curb coal and to rebalance their energy portfolio mix.

This has led to many coal mine closures across both the developed world and many emerging markets. Reports from S&P Global Market Intelligence revealed that the US coal industry in Central Appalachia has been under a slow attrition as mines are idled over the past 7 years. The Institute for Energy Economics and Financial Analysis (IEEFA) commented that the US coal industry will continue its overall decline, stating that:

“In the first quarter of this year, coal industry jobs declined by 1,266 – according to the most detailed of the government’s sets of employment data – after increasing by more than 2,000 in the last quarter of 2016. There is nothing to indicate that jobs recently promised in the US coal industry will be jobs delivered….”

Here’s a snapshot of the mapping of coal mines in the States (courtesy of the US Energy Information Administration). Most of the mines are located in the coal fields of the Appalachian mountains, which once powered the industrialisation of America during the later half of the 19th century. 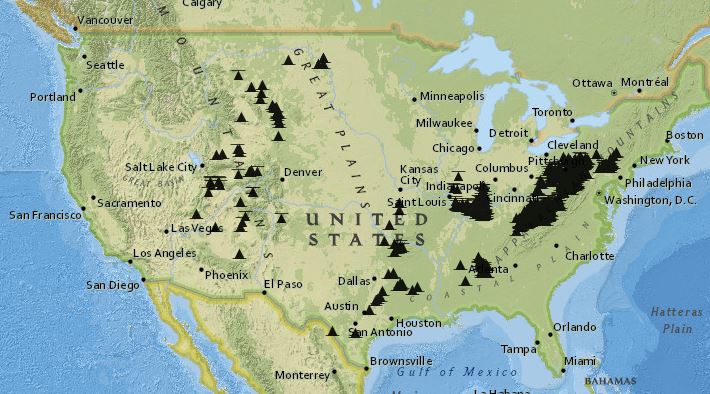 The picture is as also as dire in emerging markets, with the biggest consumer expected to move away from coal in the future.

The Chinese are desperate about pollution and environmental damage in their country, with the central government identifying it as an existential threat to the sustainability of China’s growth and her future. Even President Xi Jinping’s book has a few whole chapters committed in explaining the rationale and the explicit targets of reducing pollution and cleaning up the country.

Local Chinese media have repeatedly reported countless coal mine closures as the central government pressure local authorities to lower carbon emissions, leaving blights of coal towns in their wake. In 2016 alone, the total number of coal mines has been limited to 10,000. The Chinese government is also rolling out plans to transit affected families and workers into other parts of the economy as they continue to clean up the environment, lower their reliance on fossil fuels, and rebalance their economy away from manufacturing to services and consumption.

Under assault from competitive pricing of its fossil fuel counterparts and from the urgent and pressing need of environmental protection, the coal industry is at a critical juncture. However, there is another serious threat to the global coal industry, and that is the falling costs of renewables.

The example of the Kentucky Coal Museum clearly shows how much has changed in just a few years.

A chart from Lazard shows the fall in costs of solar and wind energy over the past few years:

The fall in costs have led to an increase in adoption rates for electricity generation in China as well as the US, as seen from data compiled by the EIA:

Even Saudi Arabia, the mighty crude oil sultanate, is moving to renewable energy, announcing that it is installing up to 10 gigawatts of renewable energy capacity over the next 5-7 years. This fact alone speaks volumes about the views of the world’s largest oil industry insider of prospects of the fossil fuel industry.

While there certainly is some form of over-enthusiasm and hype surrounding the various renewables and their potential to change the world, I’m of the opinion that due to the very fact that costs are so viable at this juncture, there is a real and serious chance for humanity to finally transit gradually to renewable energy sources. There is also the huge potential of scaling up of renewable energy, as more investment and capacity increases scale and adoption, leading to further declines in cost.

Time is also required to install the infrastructure needed for renewable energy like wind and solar industries to decently takeoff and sustain. Policy-makers have to also grapple with the unemployment fallout as coal mining dwindles. This may become a prevalent social issue and as such there could be some serious, stubborn and foolhardy resistance materialising going forward.

As for new technologies like clean-coal (HELE tech / CCS) technology that can reduce CO2 emissions from coal-fired power plants, they may have missed the mark altogether if renewables are increasingly adopted.

Thus, the coal industry is being under existential threat from:

These are structural factors which are here to stay. A concise article from Bloomberg highlights the current situation.

A tectonic shift is happening in the dynamics of the global energy industry, representing opportunities for the shrewd and informed investor. While some may opt to pick winners in this global energy struggle, we could also look at who stands to lose the most in order to play this trend. 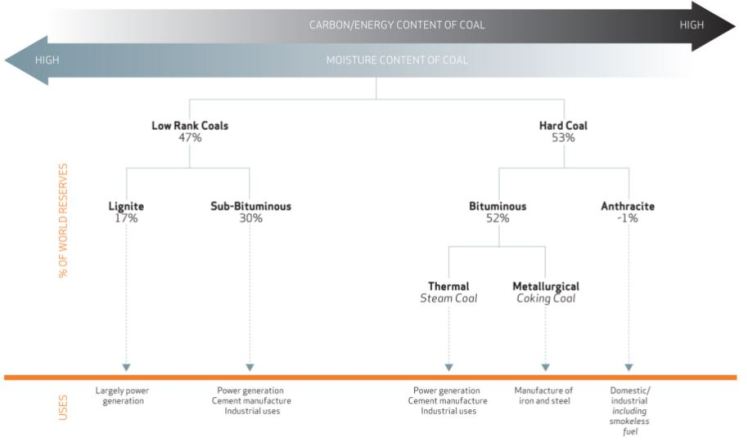 The diagram above from the World Coal Association breaks down the various types of coal. Generally speaking, if this development as explained above continues, the losers will be low rank coals (lignite) and thermal coal (under Bituminous), which is utilised in power generation.

Shorting producers of lignite and thermal coal would be lucrative as they struggle to adapt to the changing landscape. Incumbents are typically slow to adapt and evolve, at least until the pain is so great that it starts to hit home. A great example of this competitive dynamic in free markets could be seen among the retailers worldwide, as they struggle against the tide of e-commerce. Would the incumbent coal miners still survive over the next 10 years?

Below is the weekly price chart of KOL:

While one can consider shorting such an ETF, not every constituent is a pure play on coal itself.

Because this development is slowly becoming a consensus (perhaps?) understanding, I’m considering pure coal miners that are in emerging markets like India, Thailand and Indonesia where this understanding and awareness is probably not as extensive as in the Western developed markets, representing an opportunity to capture the “mispricing” (or rather the lack thereof).

When it comes to picking individual names, traditional valuation multiples don’t matter with such a situation, as what is perceived to be ‘value’ or cheap can get cheaper until they don’t exist. The balance sheets and asset quality of coal-related companies are not independent of the fate of overall coal prices – they rely on the direction of the fossil fuel’s price itself…

Will coal be eventually thrown into the dustbin of history?