It’s time for a review of 2018, and I have to say that I managed to protect my capital (which is great and am fortunate) but I did not capitalise aggressively on opportunities that I was aware of.

But for both Wall Street and Main Street and for investors who have to be invested from the long side, it’s generally a really tough year as every major asset class recorded negative year-to-date performance:

In fact, every major investible asset class in the public markets failed to outperform inflation rates this year, with the median return of major asset classes one of the lowest since the 1980s – à la Ned Davis Research: 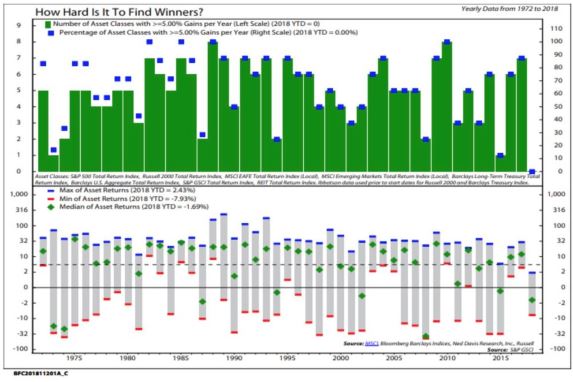 It’s as if the entire of 2018 was a mockery of stellar 2017 whereby we saw strong performance of risk assets amidst unusually low levels of volatility.

My strategy for 2018 was simple, and I shifted to a defensive mode after I saw a combination of warning signs in January. I saw that:

Without trying to be or sound like an expert on technical analysis, I simply eyeballed the hot areas of the world and I became worried about the movements I saw. It begun with the cryptocurrency markets after Bitcoin ($BTC) hit all-time highs when I was in Japan in late-December 2017 and it was all-the-rage all over my Fintwit. BTC plunged in January and went into side-way movements while the rest of traditional asset classes continued to perform well.

In late January, Hong Kong’s Hang Seng Index climbed ferociously. There wasn’t a day where the index did not open up but close down, and the Chinese H-share market (Hang Seng Mainland 100) recorded gains of more than 10% in HKD price terms in just one month.

It made me pay attention as the last time such movements happened were during the spring of 2015 (the A-share bubble) and also back in early-2007; times of meteoric share price increases and rampant domestic investor optimism. Here’s the weekly bar chart of the HSI: 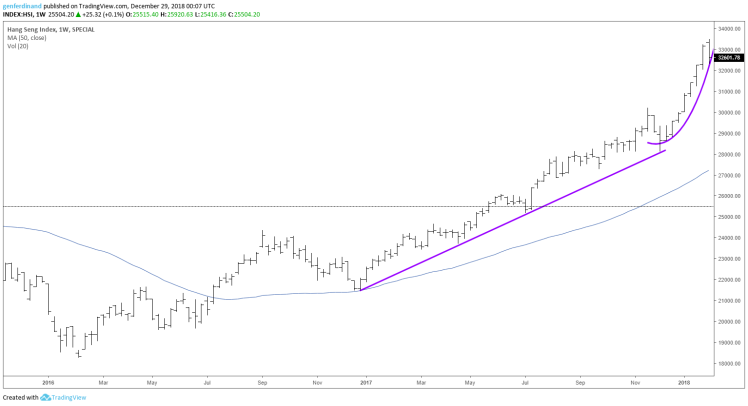 I was paying close attention to the hot trades such as the Facebook-Apple-Amazon-Netflix-Google (FAANG) and the Baidu-Alibaba-Tencent (BAT) themes. People were literally buying them hand over fist in 2017. These are the ‘generals’ of the current cycle as their share price gains have relatively outperformed all their peers, and I felt that any ‘break’ of the narrative will trigger a pause or worse, the start of a down cycle. 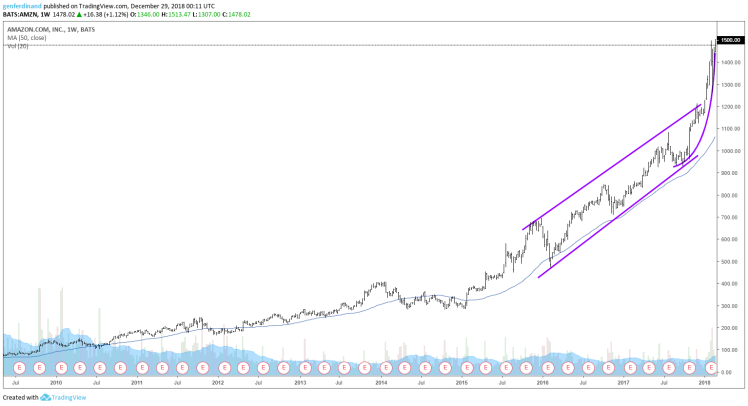 Typically, such movements happen towards the end of a strong ascent and when both professional and retail investors pile in as the fear of missing out (FOMO) kicks in. Strong buying pressure creates parabolic kinds of rushes and strong gains reinforce the bullish narrative in the minds of participants.

Even the S&P 500 Index could be said to display some parabolic-type of characteristics, particularly after the Trump Administration rolled out it’s fiscal reforms of tax cuts, which excited Wall Street and Main Street:

I was surprised that I couldn’t find anyone bringing this point up earlier in the year. It’s possible that earlier in the year everyone was latched onto the ‘synchronised recovery’ narrative and comfortably feeling invested as the reflexive situation of continued price gains psychologically reinforced justifications for being positioned that way.

I was cognisant of the risks of declining global liquidity pose to risk-assets as major central banks (with the US Fed leading) normalise their respective monetary policies. The Fed’s tightening campaign had an adverse effect on offshore US Dollar liquidity, which weighs on economic growth prospects in emerging markets according to the Bank of International Settlements.

A continued withdrawal of liquidity in markets by central banks will also accelerate a rise in volatility across asset classes, which was what we saw over the past three months.

The other macro driver this year was a deleveraging China, which so so few people caught onto early when the trade war narrative began in the summer clouded the attention of investors worldwide. Monetary aggregates slowed to new lows on a year-on-year basis in China, and it isn’t surprising that hard economic data continued to deteriorate in the Red Dragon.

The Italian situation is a case study I intend to dive deeper in the future. While I wrote on the elections back in the first quarter and advised to avoid Italian sovereign debt, I do not know why it took some time for market participants to actually realise the risks that the new populist government pose to European asset markets. Were investors too distracted by Trump’s trade rhetoric (still remember Gary Cohn’s departure?) or were they just being too complacent or gullible of the Euro-sceptic coalition?

It was very clear that the populists elected intended to expand the budget deficit and act in the interests of the lower classes in Italy (their electorates). There was plenty of time to prepare for a pricing of higher risk premiums into Italian asset markets. Were investors expecting them to suddenly abandon their campaign promises and obey the bureaucrats of Brussels and Frankfurt?

Are financial markets even good at pricing political risks?

Going long on the USD:

This was frustrating as I was already bullish on the US Dollar, and it could have been THE TRADE OF THE YEAR. Ironically, I actually pointed out about an opportunity to go long the greenback against a basket of other currencies back in April.

I’ve learnt by experience and observation that the best equity shorts are in companies that are institutional favourites (high institutional ownership) with retail investors piling in once the institutions are positioned. Their valuations are typically perceived as rich but ‘entirely justifiable’. Not only that, they also have to be caught up with a narrative that everyone believes in, which leads to crowding in the first place.

Any ‘break’ or damage to the narrative will snuff out euphoria and optimism, and if it’s devastating enough, there will be a wave of selling pressure that knocks equity prices back to the ground. Selling pressure will accelerate if institutions have to liquidate in order to meet clientele redemptions. In such situations, fundamentals don’t really matter as the market participants’ time horizons are shortened.

I missed great short opportunities despite tweeting about some of the FAANG/BATs throughout the summer. Was I afraid of dip-buyers? 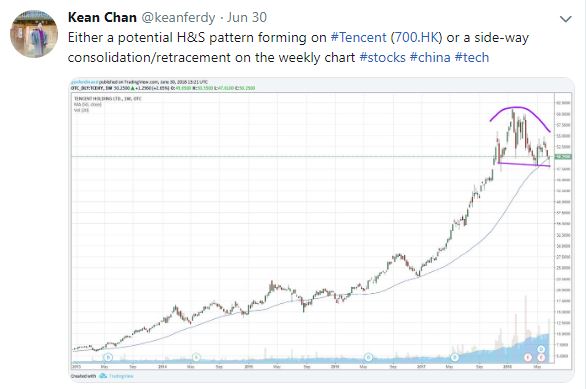 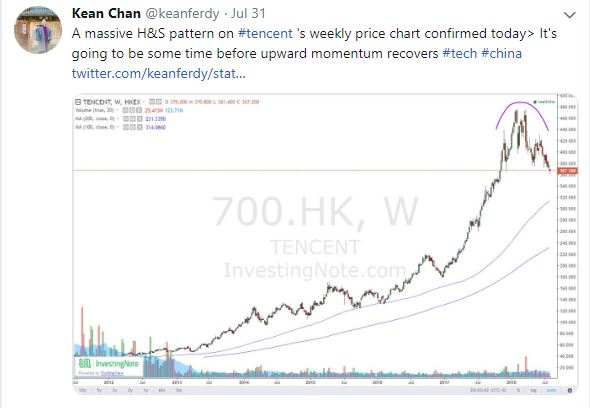 Although I’m fundamentally bearish US sovereign debt, I specifically recorded this idea into my logbook after my risk-off model flashed red again. But I held off from pulling the trigger and decided to: ‘wait for a few more days’. I could have added in an action plan that is contingent on a few scenarios developing instead of just leaving things as it is and then looking back and wondering what happened.

This was back in late-October when the 10-year was at 3.20% – a great opportunity missed…

I blame myself for all these misses. I was not as focused as I ought to and I can only work on fine-tuning my process and methods. Looking back at my records, I find that I’m not decisive enough when the time calls for it, and I’ll focus on improving that area moving forward.

For perpetually the entire fourth quarter, the VIX curve remained in backwardation, meaning that near-term contracts are priced higher relative to contracts expiring further out, resulting in an upward-sloping line from the left when plotted out across various maturities:

The VIX curve has flipped from being in contango in 2017 (rewarding short volatility strategies) to diving into backwardation and hanging around there.

Other than being cash heavy and being positioned lightly, I managed to protect my equity positions in October by hedging out using S&P 500 index futures after my risk-off model alerted me back then.

Now, Citi’s Macro Risk index is back to levels not seen since early-2016, and various data indicate that investor sentiment has completely flipped from optimistic levels twelve months ago to cautious-pessimism at this juncture.

In order to improve on some of my weaknesses, I have been studying the ways of the Samurai and I’m pleasantly surprised how the philosophy and art of ancient Japanese swordsmanship and strategy can be directly applied into the investment process. I will share what I’ve learnt in a series of articles with my partner on a future site we are working on.

Additionally, in a review of 2018, I realised its vital to understand how humans latch onto narratives in financial markets and how they react to confirmatory/conflicting evidence that causes shifts in narratives. Thus, I’m planning to thoroughly study Thomas Kuhn’s epic classic ‘The Structure of Scientific Revolutions‘. This was shared to me by my friend Alex Barrow in the US when I was introduced to what has been deemed the ‘Kuhn Cycle‘: 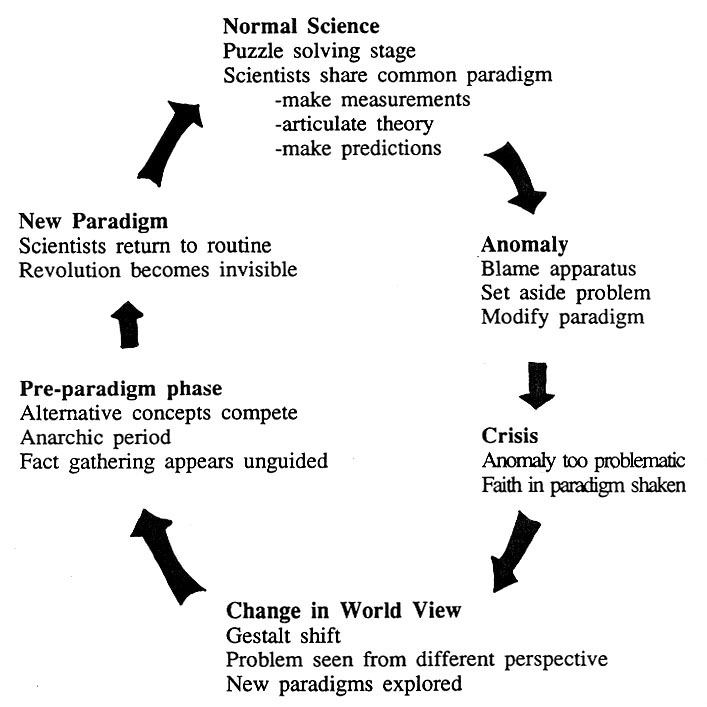 Thomas Kuhn was a philosopher of science during his lifetime and he argued that transformative ideas do not arise from the day-to-day gradual process of experimentation and data accumulation, but that revolutions in science (those breakthrough moments that disrupt accepted thinking and offer unanticipated ideas) occur outside of what he calls ‘normal science’.

I believe that the Kuhn Cycle framework can be applied into markets as one heuristic to dissect how market participants understand the world and how they deal with ever-changing variables in their attempt to price assets.