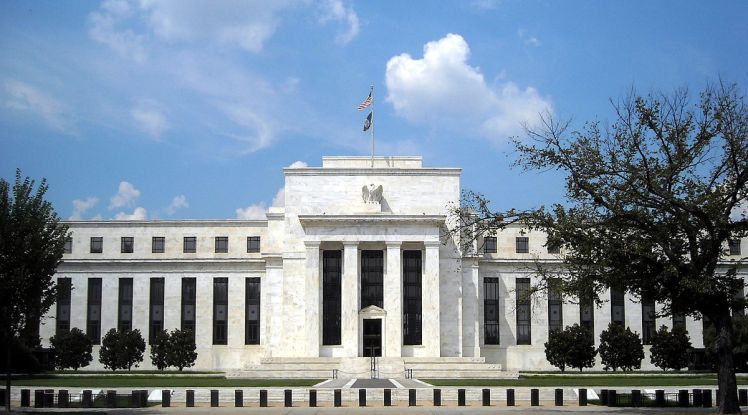 Last week’s Federal Open Market Committee (FOMC) meeting in the U.S. took the financial community by storm as its January policy update were seen by investors and market observers as an outright ‘U-Turn’. However, it may not be so.

The most talked about was the change in the middle portion of the Fed’s statement during its release, with the words ‘will be patient‘:

‘In light of global economic and financial developments and muted inflation pressures, the Committee will be patient as it determines what future adjustments to the target range for the federal funds rate may be appropriate to support these outcomes.’

As compared what was announced in December:

The other point of focus that contributed to the dovish take on the Fed’s January meeting was the discussion of its balance sheet policy. The Powell Fed released a statement regarding its balance sheet normalisation (BSR), with the following sentence that was taken to be surprising given that the Fed previously stated that BSR was on ‘autopilot‘:

‘The Committee is prepared to adjust any of the details for completing balance sheet normalization in light of economic and financial developments. Moreover, the Committee would be prepared to use its full range of tools, including altering the size and composition of its balance sheet, if future economic conditions were to warrant a more accommodative monetary policy than can be achieved solely by reducing the federal funds rate.’

And in the press conference: 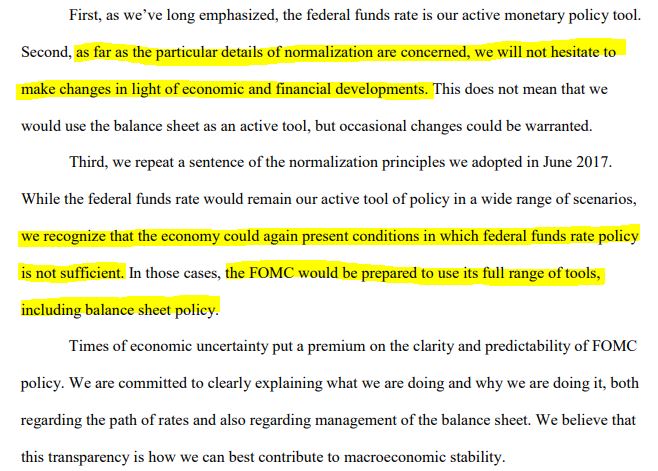 There was a consensus among the various voting members this time as well. Everyone voted for the current action (including Esther George and Eric Rosengren), reinforcing the Fedspeak over the past few weeks of a Fed that is appearing to be more data-dependent in setting policy.

Market participants got what they wanted, with the reaction in financial markets reminiscent of classic ‘risk-on’ types of movements.

Over that trading session on the 30th of January 2019, equity indexes and futures rallied, high yield credit surged, Treasury yields declined across the curve, the U.S. Dollar weakened broadly and Gold rallied. Given these kinds of movements, some are of the opinion that this is the end of the current tightening cycle.

Both equity and bond market implied volatility (IV) fell since the FOMC’s meeting as well. The CBOE Volatility Index is back to levels not seen since four months ago. 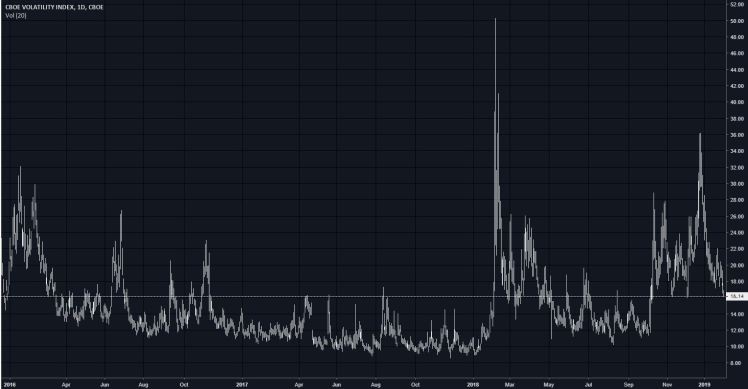 The Citi Macro Risk Index tells us that financial conditions have eased since November and December last year:

Financial stability concerns will come back and haunt the Fed

Although the Fed is now emphasising about inflation developments before tightening further, it is possible that inflation pressures (at least for 2019) will remain benign and that the markets already know this. As Tim Duy wrote here:

‘As far as the future is concern, is this the end of the cycle? The bar for raising rates seems high now and apparently hinges on the inflation boogeyman to finally show his face. Powell said “I would want to see a need for further rate increases, and for me a big part of that would be inflation.” So they really need to see actual inflation, or very strong growth that pushes the unemployment rate substantially lower, to justify a rate hike. This appears much more stringent that the story implied by the last dot plot of interest rate projections.’

But have they forgotten about what they have consistently communicated last year or are they simply downplaying it just for the moment?

Chase Taylor of Pinecone Macro did some great work on the Powell Fed, whereby he dug up Powell’s quotes over the past year and highlighted that current policy-makers are more concerned about financial stability over other issues like inflation:

Note this sentence: “It is worth noting that the last two business cycles did not end with high inflation. They ended with financial instability…”

Not a U-Turn by the Powell Fed

Robin Brooks of the Institute of International Finance has this to say on Twitter: 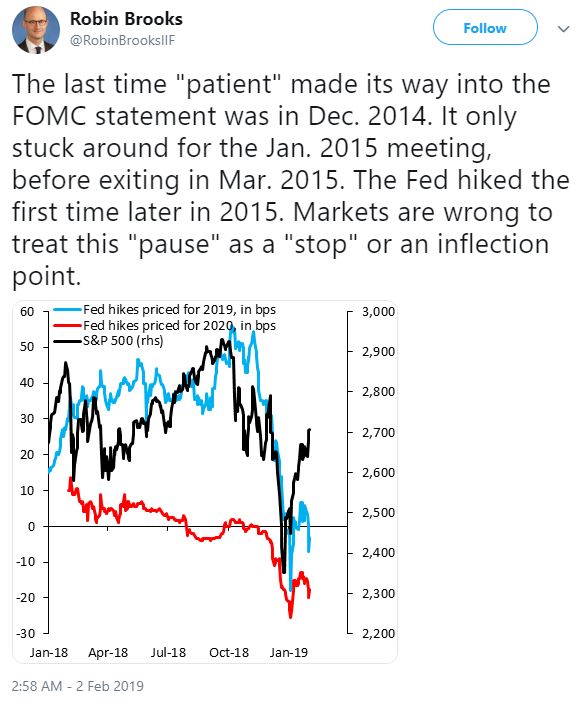 What ‘patient’ really means will be tested in the months and quarters ahead.

It is simply too early to say that the Fed is done with its hiking cycle, although market participants seem to have largely priced in that outcome based of where Fed Funds futures pricing are today. Market prices suggest that investors are expecting only a 4.0% chance that the Fed will hike by another 25 basis points. This implies that the risk-reward proposition of betting on a slower Fed normalisation scenario is no longer promising.

The current relief in investor sentiment, and perhaps better-than-expected economic data in various parts of the world, if continued, will fuel a return of risk-taking and carry-trades. If financial conditions ease but future tightening actions are priced further out, it sets the stage for nasty surprises once financial stability concerns haunts the Fed once more. It could be drastic if the reaction function of the Fed is misunderstood by the consensus.

Investors have to be very selective on their equity and fixed income exposures in both the U.S. and in emerging markets. Avoiding market segments with high interest rate risks is still a prudent thing to do – macroeconomic forces typically move slowly, but prices and the speed and extent by which narratives are caught onto may always be too extreme over the near-term.

Investors would not want to bet on an outright and broad depreciation of the U.S. Dollar for the moment (at least for the whole year). We will have to monitor growth differentials between the U.S. economy and the rest of the world to have a better grasp of relative currency movements moving forward.