Our world is highly complex.

History is filled with examples of how seemingly unrelated events led to unexpected outcomes. The interaction between humans and their physical environment has second and third order effects that aren’t easy to understand. This makes the business of forecasting challenging, and the outcomes of various events difficult to model.

American sociologist Robert K. Merton popularised the term ‘Unintended Consequences‘ to describe the phenomenon of unexpected outcomes. In our modern era, the phrase ‘law of unintended consequences’ is used as a warning that an intervention in a complex system tends to create unanticipated and undesirable outcomes.

A prime example that comes to my mind is an episode during the Vietnam War.

After inheriting the French position in South Vietnam in 1955, American forces found themselves caught up in a desperate conflict with North Vietnam.

They were however, keen to avoid a similar fate as their defeated French counterparts. What started out as an initial support mission in the mid-1950s ballooned into a full-scale military conflict in the 1960s. American military strategists and planners intensely studied the French war effort, hoping that they would not make similar mistakes.

However, they may have focused too much on the last war.

Which brings us to the events of 1968. In January of that year, North Vietnamese forces engaged US Marines at Khe Sanh combat base, starting the Battle of Khe Sanh.

6000 Marines were trapped there, and ferocious fighting, heavy artillery and aircraft bombing epitomised the battle. To ensure that the base didn’t fall, the Americans fortified and constantly reinforced Khe Sanh. This battle lasted for a gruelling 6 months.

American commanders believed that it was the North’s attempt to decisively defeat them the way the North defeated the French at Dien Bien Phu 14 years earlier (Dien Bien Phu was a bloody 2-month siege where the French were surrounded). President Lyndon Johnson had daily briefings and updates about the situation at Khe Sanh, and it was said that there was even a model of the battlefield in the White House.

However, their obsession with the Khe Sanh battle led them to let their guard down elsewhere.

When the North Vietnamese launched a campaign known as the Tet Offensive – a series of guerilla-like assaults on many cities in the south far from the battlefields at Khe Sanh (see map below), US and South Vietnamese forces were caught with their pants down. 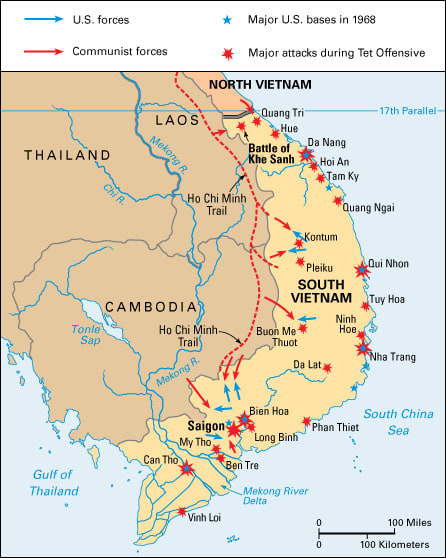 After weeks and months of sporadic fighting, the Tet Offensive lost momentum as US and South Vietnamese forces recovered their foothold. However, it marked the turning point of the war. Public opinion in the US turned sharply against the Johnson Administration from then on.

‘For President Lyndon Johnson, who was haunted by the memory of the French defeat at Dien Bien Phu, Khe Sanh became an obsession. For General Westmoreland, it was to be the final vindication of technological weaponry – the American way of war. For General Giap, the architect of Dien Bien Phu, Khe Sanh was a spectacular ruse, a gesture to catch the enemy’s eye while his own troops moved south for the Tet offensive.’

US military involvement in Vietnam failed to reach 1968 levels ever since. As a gradual withdrawal took place, the way was paved for the eventual unification of Vietnam by the North Vietnamese in the 1970s.

Khe Sanh was not lost. The Tet Offensive died out. American forces won their battles, yet they did not win the war.

The Vietnam episode, from the American perspective, was a classic case of unexpected outcomes (losing the war) despite achieving certain objectives (i.e. avoiding a repeat of Dien Bien Phu at Khe Sanh, regaining lost territory in the South post-Tet).

The North Vietnamese could have been fortunate or strategically astute, but no one denies how complex the war effort was. A combination of various factors – military prowess, morale, logistics, domestic/political support, intertwined, leading to unexpected outcomes that could either be beneficial or detrimental to either party.

In their war against the coronavirus (COVID-19) and the obsession to bring down infection rates, governments could be setting the stage up for unintended consequences.

Policy-makers have been caught and remain in an awkward quandary. They had to choose between destroying the economy in order to preserve medical systems and save lives, or preserve the economy and hope for herd immunity or risk a potential medical crisis. There were no easy solutions two months ago. There are no easy ones now.

But what I do know is that such large scale interventions in complex systems typically lead to unintended consequences.

Over the past few weeks, some disturbing developments have awoken me from my hiatus of writing. Consider the following:

I’m sure some of you have chanced upon these developments.

Dairy farmers in France are pouring their milk produce into drains. Tomato and asparagus crops in Spain are not harvested due to a lack of workers.

The New York Times last month reported that millions of pounds of cabbage and green beans were being destroyed in South Florida and Georgia, tens of thousands of pounds of onions buried in Idaho, and millions of unhatched chicken eggs were smashed to avoid raising the chickens because the market has disappeared. And more from Business Insider about the state of US farms: 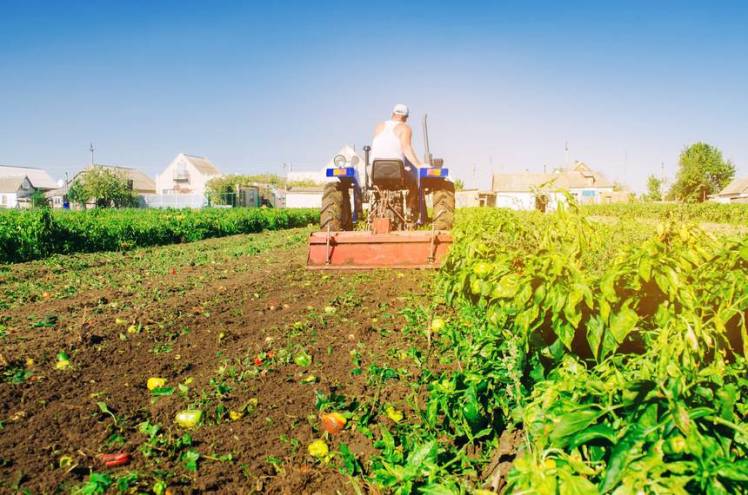 Livestock farmers have to cull their animals because meat plants were forced to close. According to CBS:

‘The National Pork Producers Council (NPPC) said last week that approximately 170,000 pigs per day cannot be sent to plants — and there is not nearly enough space to house all of them. The council called the euthanization of up to 10 million hogs in the coming months “the only humane option” to avoid overcrowding on farms, a sentiment echoed by meat companies.’

In emerging markets such as India and other South Asian countries, there have been dozens of reports indicating that wheat farmers in Punjab and Haryana (major wheat-growing states in Northwestern India) are worried about their harvest due to a shortage of labour. Typically relying on migrant workers, combine harvesters could not be operated, and loading and unloading work could not be done. Potato farms and corn fields across the Ganges Plains also face a grim fate.

Redistribution networks have been heavily disrupted due to lockdowns and movement controls. A huge amount of produce had to be destroyed or simply left to waste. Ripple effects on the agriculture supply chain are being seen. 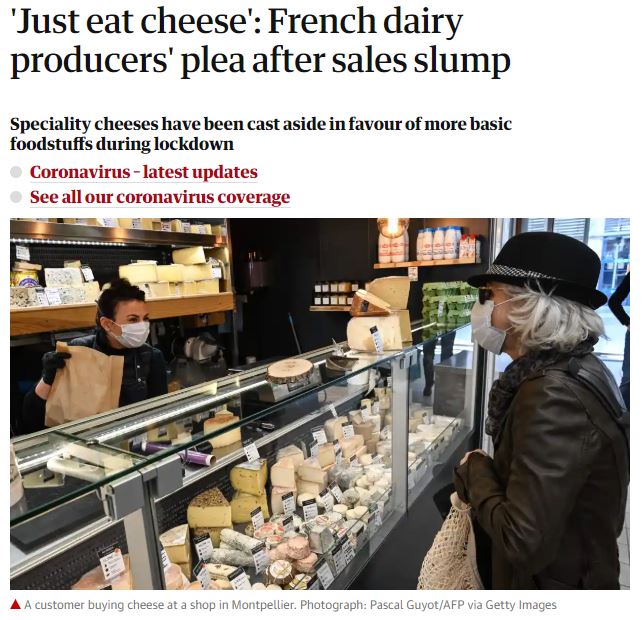 Needless to say, this problem wouldn’t be solved by cash handouts from governments. Crops have to be replanted, animals bred, and that takes seasons and time.

Even without growing up in a Marxist church, we know that higher food prices leads to social unrest. The French Revolution was sparked by soaring bread prices as peasants all across France took up their pitchforks. Russia went through a similar fate à la the Bolshevik Revolution a century ago.

When the situation deteriorates, policy-makers will respond with all their powers and abilities.

They may have good intentions and believe that they can solve complex issues. But I recall that centrally-planned solutions conducted by bureaucrats have a history of dismal failure (think of the crop distribution programmes of the old communist regimes). There is simply no good reason to believe that this time is different.

The current geopolitical climate of suspicion and mistrust and a deterioration of US-China relations adds fuel to the fire. Hoarding behaviour is likely to be seen when it comes to national food security. In such a market environment, countries with food security may start to see economic out-performance as social conditions may be relatively more stable.

Governments may win the battle against COVID-19 some day, but as unintended consequences materialise, many more battles seem to be ahead of them.

What do you think?

One thought on “By winning battles against COVID-19, governments could lose the war”