A change in the Narrative

Among the many eyebrow-raising, bizarre, and interesting developments (zero-interest rate policies, negative yielding bonds, rise of populism) that have occurred since 2010, one of them that really defined this current decade is the death of the ‘peak-oil’ narrative.

Remember those days when people were talking about how there could be a day when we would reach the maximum rate of petroleum extraction and following that, face diminishing returns?

Remember those energy experts and forecasters calling for crude oil to reach US$ 200 per barrel? Remember how well-known investor Jim Rogers wrote in his book that some day people will be digging for oil at the grounds of the White House? 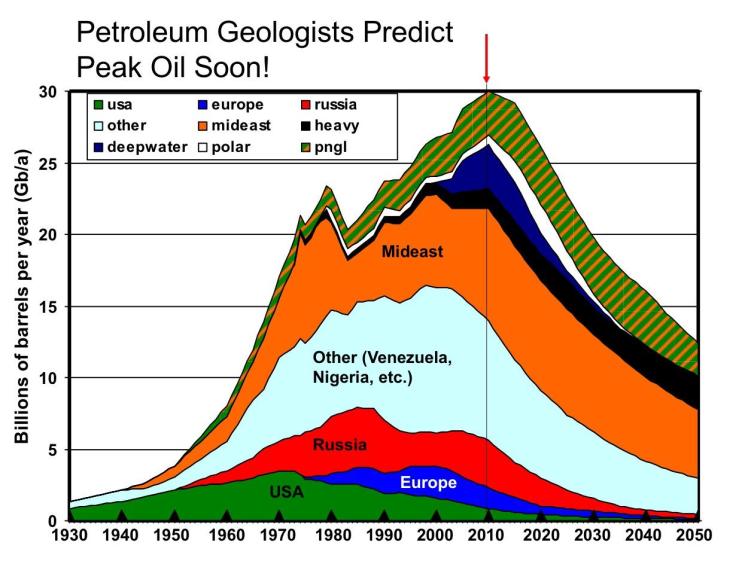 That was the ‘peak-oil‘ narrative that dominated the psyche of almost a generation of investors and corporate executives, and it took a long time for that narrative to change. It was so pervasive that investment firm SLJ Macro noted that a decade of high oil prices have actually led to a more energy-efficient world in a paper as everyone was worried about ever-rising energy costs.

It was the collapse in crude oil prices four years ago that was the coup de grâce to that narrative, and the focus on how the North American shale energy producers were gaining market share of the global oil market (at the expense of OPEC’s share) shocked energy analysts and market observers.

The ‘peak-oil’ narrative is now a distant memory, fitting for a bygone era. I’m hard-pressed to find anyone who believes that crude oil prices will ever rise to US$ 100/barrel and beyond, or any investor interested in the energy sector. Naturally, this sparked my curiosity since 2017 and I’ve found it interesting that the narrative has completely flipped from ‘running out of oil‘ to ‘too much oil‘.

The kicker to this is the narrative of the ‘imminent replacement of fossil fuels from renewable energy sources‘.

Additionally, the rise of electric vehicles (EV) and the hype around it is taking up everyone’s attention. Many have been calling for the impending replacement of the internal combustion engine and the setup of the EV network and infrastructure.

The Energy Information Administration (EIA) is projecting a gradual accelerating rise of renewable energy sources over the next three decades: 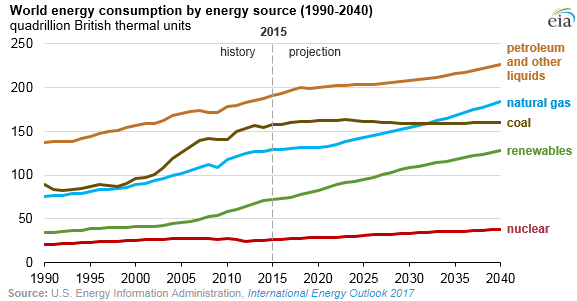 The EIA projects that renewables will also form a larger part of the domestic energy mix in the United States:

I agree that the long-term outlook for renewable energy sources is bright. There is also political will in the biggest emerging markets (China & India) to lower their countries’ reliance on fossil fuels. And political will is important for efficient policy planning and implementation (some may think it’s the only thing that matters for a complete overhaul in energy mixes).

However, such changes are massive and takes a long amount of time (often decades) as infrastructure fitting takes months and years to come into being. And even by then, it’s difficult to say that the fossil fuel industry would be completely obsolete (they could just be slightly less important as a contributor to global energy production).

In the meantime, we may still be stuck to fossil fuels. I think the consensus may be a little too quick to dismiss them, and by acting on this conclusion, the consensus belief has probably been to a large extent, baked into financial markets. Therein lies the opportunity.

The following charts show how the market capitalisations of the US energy sector has fallen relative to the broader equity market (using the S&P 500 Index). Needless to say, they are at cycle lows: 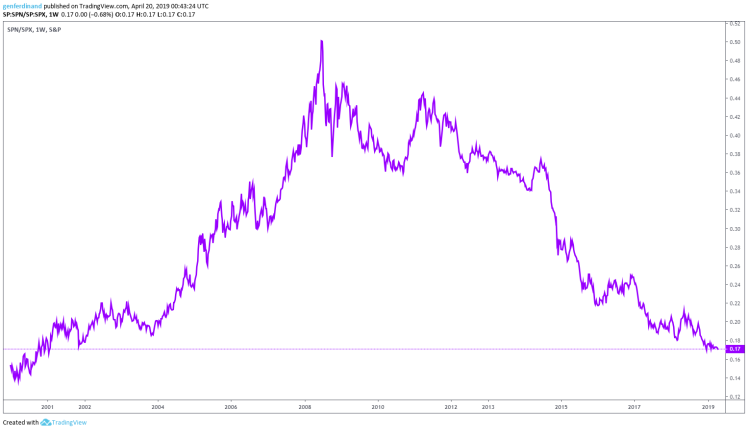 Schlumberger (SLB), an upstream energy company, relative to the S&P 500:

This chart from Orbis Investments sums up whatever that has been happening in the oil and gas industry: 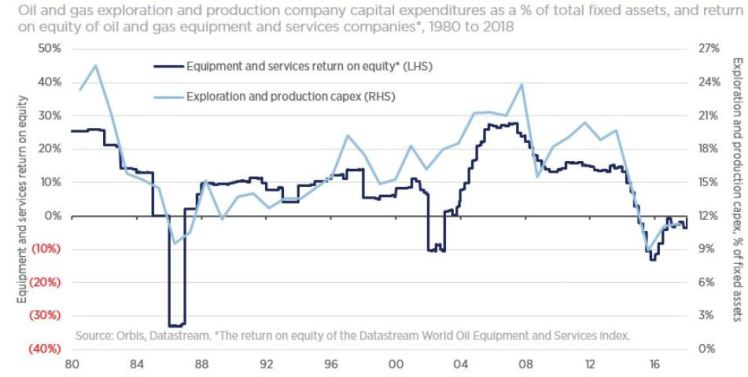 There has been declining new investment in exploration and production (E&P), and this trend is taking a huge chunk of future capacity out of the market. This means that potential supply may take a longer time for output to come online in the future if demand actually maintains or even accelerate. This dynamic is bullish for oil prices as a whole.

Lower investments tend to improve the future return on equity (ROE) of an industry and investment returns of shareholders. Société Générale’s Andrew Lapthorne has provided empirical evidence that firms with the lowest asset growth have geenrally outperformed those with the highest asset growth: 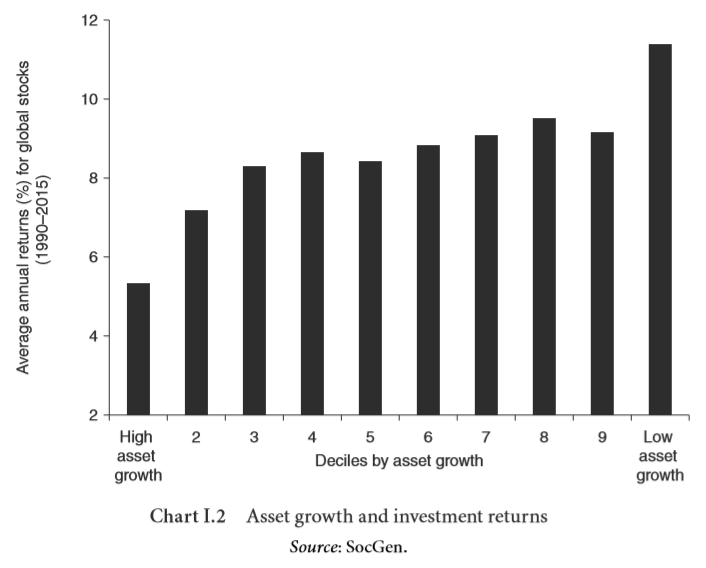 This counter-intuitive logic tends to show its effect among highly-cyclical industries like semiconductor manufacturing, maritime shipping and mining. It has also been termed as the ‘Capital Cycle’ to describe the phenomenon of the inverse relationship between the amount of invested capital and subsequent future investment returns.

I believe that the oil E&P industry fits into this model at this juncture given how much capex has been shelved and postponed. An improvement in the supply side will lead to an improvement in returns which would be above the cost of capital, which would lead to higher share prices in the future.

If you’re interested to understand more about the Capital Cycle, check out Edward Chancellor’s book ‘Capital Returns‘ (a review from the CFA Institute can be found here).

Investor sentiment for the energy sector is poor

FT has reported that the Norwegian government is trying to move away from the energy industry, which has fueled much of the Scandinavian’s economy over the past two decades. The Norwegian sovereign wealth fund has been trimming investments in energy companies. In fact, they were following the trail of the Saudis, who are also divesting from oil & gas companies.

Naturally, when big energy players are acting in this manner, everyone else who believe that these players know something that they don’t, tend to follow suit.

The recent BofA Fund Manager Survey, which is a great way of understanding market positioning over a mid-term horizon, suggests that energy-related companies remain under-weighted by Wall Street investment managers and are unpopular among analysts. In fact, they have remained so for some time now.

Of course, an economic slowdown such as a global recession will affect the cyclical demand of energy products like crude oil. But I’m thinking one, two steps further. Once demand picks up when economic growth stabilises or improves, would we have enough capacity to fulfill a pick-up in demand given the current backdrop of declining capex and poor investor sentiment?

Also, if interest rates are also higher, a higher upswing in crude oil prices is even more likely as there could be lesser new investment (assuming demand remains the same). Capex may just become more expensive for energy players that are reliant on debt financing to roll out their projects, which translates to slower new capex growth.

If things continue the way they are, it’s possible that we could wake up one day and find ourselves looking at an US$ 120 or even US$ 150 price tag on a barrel of oil!

I would look for E&P companies and offshore drillers that have relatively strong balance sheets. With high fixed operating costs but lower variable operating costs, their profit margins are an implicit leverage off the direction of crude oil prices, which means that they provide investors an asymmetric pay-off profile.

It’s possible that the death of the ‘peak-oil’ narrative has now gone too far, which means that there are interesting opportunities for contrarian investors willing to test the conventional wisdom at this juncture and beyond…