In the first article of this series, we covered the philosophy and mindset of Soros’ Quantum Fund. We learnt about (i) Soros’ belief of Heisenberg’s Uncertainty Principle, (ii) his attitudes towards risks (that its omnipresent and has to be managed in relative and subjective degrees), and (iii) his ruthless obsession about the bottom line. 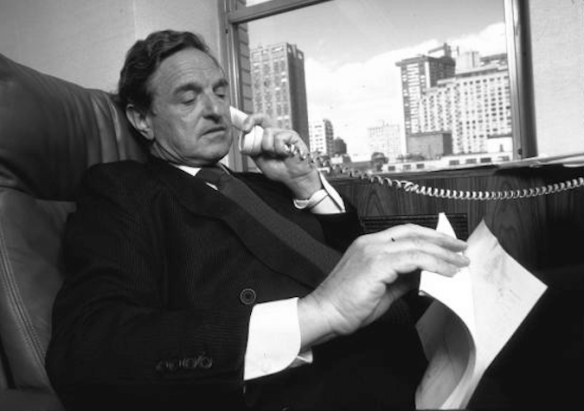 In this second piece, we will cover some insights as to the nature of his strategies that is built upon his philosophy.

(I) Be Forward Looking! Anticipate what others may not expect

This sounds so simple and painfully obvious, but few practice this. Even many in the finance and investment industries don’t do this, despite their claim in doing so (much less their clients). There are several reasons why we tend not to be forward looking, including our propensity to think that the recent past will continue and our natural instincts to herd and groupthink.

In effect, Soros is practicing what he believes from the Uncertainty Principle and human fallibility – that one should not be focused on the present facts but focused on thinking how there could be potential variables that were misunderstood or overlooked or other unexpected variables that could change the entire dynamic in the future.

In John Train’s “Money Masters of Our Time”, James Rogers, an ex-colleague of Soros, mentioned that:

“We aren’t as much interested in what a company is going to earn next quarter, or what 1975 aluminium shipments are going to be, as we are in how broad social, economic, and political factors will alter the destiny of an industry or stock group for some time to come. If there is a wide difference between what we see and the market price of a stock, all the better, because then we can make money.”

This was also emphasised by macro maverick Stanley Druckenmiller, an investor with one of the best track records and also a former colleague of Soros at Quantum. He once mentioned that his “job for 30 years was to anticipate changes in the economic trends that were not expected by others, and, therefore not yet reflected in security prices“, and here he said “too many investors look at the present; the present is already in the price. You’ve got to think out of the box and visualise 18 to 24 months from now what the world is going to be and what (level) securities might trade at… what a company has been earning doesn’t mean anything, what you’ve got to look at is what people think a company’s going to earn and if you can see something in 2 years that’s going to be entirely different than the conventional wisdom, that’s how you make money”

A recent example would be his bet on Japan in 2012 and 2013. While we don’t exactly know if its his decision or a consensus decision made by the managers of his family office, it’s an example of the forward thinking / anticipation approach at play.

After the Fukushima disaster in 2011, foreign investors fled Japanese financial assets and there was a great amount of pessimism on Japan’s economic prospects (do you still remember?). There were talks of a ‘nuclear holocaust’ as people became concern about a radiation fallout, and it did not help that 2011 was also the time of the Eurozone’s sovereign debt crisis, fuelling risk aversion across the global financial markets and causing the Japanese Yen (JPY) to strengthen relative to other currencies. A strong JPY affects Japanese exporters as they earn less after currency translation, affecting Japanese equities.

The Japanese equity market on aggregate did nothing much since the Fukushima disaster, and valuations were relatively cheap and depressed. No one was interested investing in Japan as everyone believed that they will continue their decade(s) long deflationary cycle. However, the catalyst to change the whole dynamic and situation was a political variable, the return of Shinzo Abe after he took over the leadership of the LDP in September 2012.

Forbes reported that Soros was actively participating in the Japanese equity markets and short its currency, the Japanese Yen (JPY), as early as October and November 2012. Abe-san only assumed the role of Prime Minister in December, which means that Soros’ firm could be early in anticipating that Shinzo Abe was a potential variable to change the whole dynamic in the fate of Japan’s asset markets. He was positioned before the fact materialised. This shows the hallmark of an active speculator and a forward thinker in anticipating how variables (that the majority are not thinking about) could change the current situation that securities are priced at.

We all know what happened since then. PM Abe pushed for his promise of ‘ending deflation’ in the country and the Bank of Japan (BOJ) launched its aggressive monetary easing programme in April 2013. The JPY got crushed and Japanese equities took off. A value-orientated investor using traditional valuation metrics or a technical-orientated trader would probably be reluctant to foray into Japan before Abe-san was elected Prime Minister (there would be no buy signal according to their frameworks and lenses). Like a master chess champion anticipating in tune with the battle board and anticipating his opponent’s moves, Soros was able to be ahead of the crowd and to capitalise quickly when unexpected situations materialise. This is macro investing on a higher level. Learn to anticipate!

(II) False Trends & False Beliefs – be aware of them and play them if possible!

Since there is nothing in the financial markets that could be precisely determined (with a 100% confidence interval), false trends and reflexive realities are prevalent, and an investor has to be comfortable in managing his/her own expectations when participating in the markets.

According to Soros, false trends can be prevalent and dominant enough that it moves the financial markets, causing a cascading effect on asset prices and possible secondary effects that could reinforce the initial false beliefs. This creates a ‘false’ reality, and that is how exactly a bubble is formed. Now, the catch is, Soros thinks an investor can still make money from a false trend. In other words, you don’t really have to agree with a premise of a trend that you see forming or be theoretically correct in your reasoning. You just need to put on the right positions at appropriate times while maintaining an objective and rational composure, and staying flexible and disciplined to your risk management plan.

Soros knew how to differentiate these realities and identify false trends, riding several bubbles throughout his career while at the helm of Quantum and capitalising on the mistakes of others. Learn to analyse assumptions to determine if they are true or not, look out for feedback loops that influences the fundamental reality and identify the emergence of false trends.

Don’t strive towards an ideal or perfect explanation. Be sober, analytical and pragmatic, and seek to invert your thinking and understand all possible viewpoints. The big questions of our time like ‘Is China imploding?’ or ‘Cryptocurrencies are the future’ are issues that fall into these realities. Whether they are true or not doesn’t really matter to the master speculator (they matter to policy makers!), what matters is whether you can exploit them and/or reduce your risk from them.

Because of his theory of reflexivity, human fallibility and the Uncertainty Principle, Soros has constantly been on the look out for situations in the financial markets where there is a ‘great amount of experimenting’. Imposing or experimenting with complex systems like an economy or a financial market usually leads to imbalances and unintended and unexpected consequences, which Soros thinks that macro speculators can exploit. In a mandarin book on the man himself, Soros mentioned that “the accumulated drawbacks of specifically-imposed economic models simply provide a playground for financial market speculators.”

In the 1990s, Soros also observed that the boom experienced by Asian economies could reverse and come to a crashing halt if liquidity conditions change. The stage is set as most Asian economies had debt-service denominated in hard currencies like the US Dollar, while they book their revenues in their own local currencies. Additionally, many Asian central banks maintained a peg to the greenback for the purpose of tapping international debt financing. This was a classic reflexive scenario (as pointed out in point II), whereby a strengthening USD could cause severe economic contractions throughout the emerging Asian economies, and the more it happens, the more the situation reinforces itself (reduction in import revenue, corporate earnings decline and debt-servicing costs increase, causing stock markets to decline), forcing central banks to break their dollar peg when market forces overwhelm them. Quantum positioned itself in several markets like Thailand, profiting from the severe crisis of 1997 when it ensued.

Macro dislocations, far-from-equilibrium situations, politicians meddling with free market affairs… these are all playgrounds for the macro speculator. It may be complex and a little new to most people, but to play the game at a higher level, we need to fully embrace what it takes to become a macro speculator, and work to bridge the gap accordingly. Look around you – is there any ‘experimental economics’ going on?

In December 2012, activist investor William ‘Bill’ Ackman went public about his crusade on Herbalife (HLF), betting against the company’s stock and accusing it of deliberately conducting a huge ‘pyramid scheme’ and deceiving clients as well as shareholders. This famous crusade has gotten a lot of news and coverage, and it has also resulted in ‘billionaire battles’ as other well-known Wall Street tycoons take sides in Ackman’s war against HLF.

The most prominent of them all was billionaire Carl Icahn, who took a stake in HLF and publicly sparred against Ackman in 2013 debating about his claims against the nutrition products company. I followed the issue closely back then when it was reported that Soros went long on HLF sometime in the second quarter of 2013, which spurred a rally in HLF‘s stock price.

And about 2 years later, Reuters reported that according to regulatory filings, Soros had fully exited its long position during the third quarter of 2015. In between this 2-year period, he had increased or reduced his stake in HLF along the way. 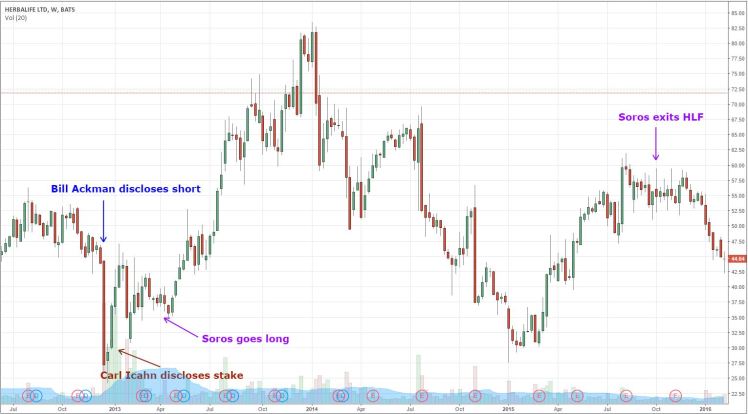 And this happened when both Ackman and Icahn are caught up with the tug-of-war of whether Herbalife is ultimately doomed to fail. And it is recently reported that Ackman is still maintaining his bet against HLF…

We won’t know who will be eventually right, but what we do know is that Soros probably could have made some money during the tug-of-war. Soros may have had a view on HLF‘s future, but it is also likely that due to market sentiment and positioning, there was a profit potential to due to the pressure of a gigantic short squeeze.

Look around you for popular trades or overcrowded positions. You may agree with a view that a certain company’s stock will ‘go to zero’ or that interest rates are going up, but if its the consensus view and most participants are positioned that way, you may even want to fade that position (even if you agree the majority is right).

This fourth point may be unorthodox, but that was how the Palindrome played the game of global macro investing. Remember, you’re here to make money, not to prove whether your opinion is right or wrong!

Now that we know what Quantum’s strategies were guided by, the next post will cover this swashbuckling firm’s management style! Stay tuned!

One thought on “Lessons from Soros’ Quantum Fund! Part II”