In the game of poker, experienced and professional poker players know that they have to choose their tables wisely. By knowing what kind of players they are up with, they can adapt and position themselves strategically to have an edge over their opponents.

In the global financial markets, investors have a far more complex task. They not only have to know who they’re up against in order to determine their edge(s), but also require to understand the masters of the game itself. But who are these masters of the markets?

To the global macro investor, the game masters are the omnipresent and omnipotent (most of the time) central banks. Central banks control the supply of money in the financial system, and influence the costs of borrowing in the real economy, in effect, regulating the overall business cycle as credit increases or contracts over time. They directly influence liquidity conditions, which is vital to understanding where asset prices could go.

This means that if one wants to successfully navigate through the ebb and flow of financial markets, one has to do his/her utmost to understand the central banks’ and their potential actions to stay ahead of the curve. It’s a nasty game, and we can’t be totally ignorant of it. 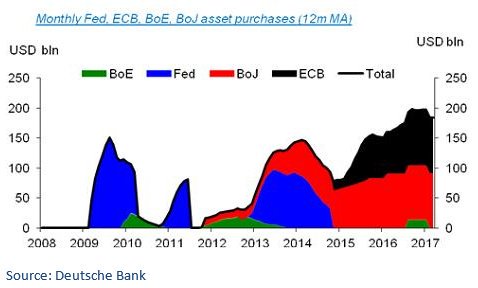 The above chart from Deutsche Bank shows the total asset purchases by the big 4 central banks, the US Federal Reserve (Fed), the Bank of England (BOE), Bank of Japan (BOJ) and the European Central Bank (ECB), in their attempt to stimulate their respective economies since the dark days of the Global Financial Crisis in 2008.

While the Fed has reduced its monthly asset purchases (the tapering) back in 2014 and have started normalising monetary policy via hikes in its benchmark Fed Funds rate, the BOE, the BOJ and the ECB have actually eased monetary policy further since 2015. The constant increase of asset purchases by both the BOJ and the ECB have supported financial asset markets (lower bond yields, tighter credit spreads, cheaper borrowing costs, higher equity prices as discount rate remains very low). This has also resulted in financial conditions remaining robust throughout most of the world, with liquidity conditions remaining healthy at this juncture (higher than 15 months ago and during the sovereign debt crisis). 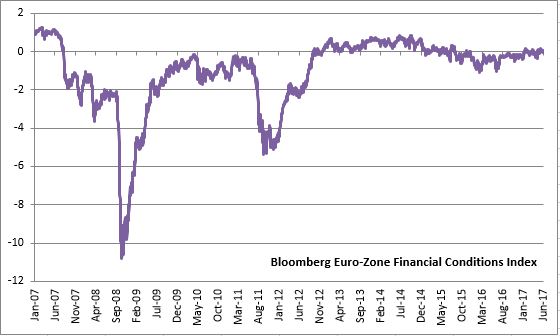 However, with its acknowledgement of ameliorating economic conditions in the Eurozone region year-to-date, the ECB has opened the possibility of a gradual wind down in its stimulus policies. Policy-makers have repeatedly flagged inflation trends (how it is still stubbornly low) to justify the maintaining of the current stance. Major high-key political events like the Dutch and French presidential elections are now over, with Germany’s Federal elections now on the political agenda. Thus far, observers have been relieved by the momentary defeat of populist politicians on the European continent…

While I do not think that the ECB will immediately taper given the scenario above, it is obvious that they will have to do something going forward. Rhetoric will be gradual as they certainly do not want an unnecessary tightening of financial conditions A probable timeline may implicitly take into account Italy’s elections at the start of 2018, with any potential rate hikes sometime after the winding down of its quantitative easing programme. According to Bloomberg’s polls, the consensus is for a first rate hike sometime during or after the fourth quarter of 2018: 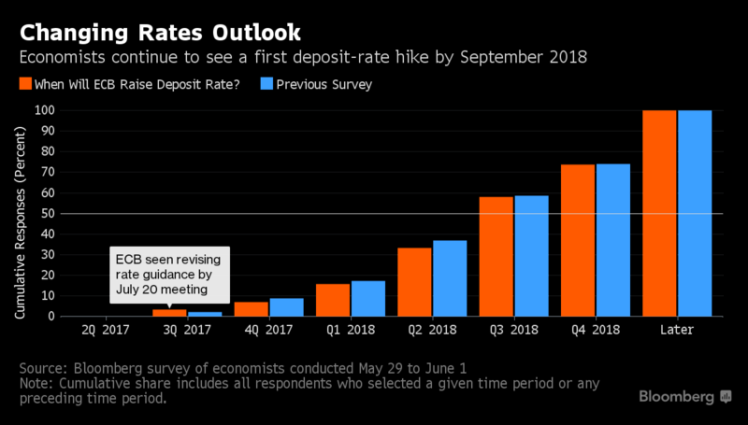 Inflation data (gauged by HICP data) is also still stubbornly the ECB‘s target of 2.0%, and with capacity utilisation and the labour market still having leeway to improve further, it remains to be seen if inflation will catch up from now until the end of 2018. There is also speculation that inflation forecasts for 2017 and 2018 have to be downgraded… This all means that the ECB don’t really have to announce any ‘tapering’ intentions while they try to maintain their credibility. 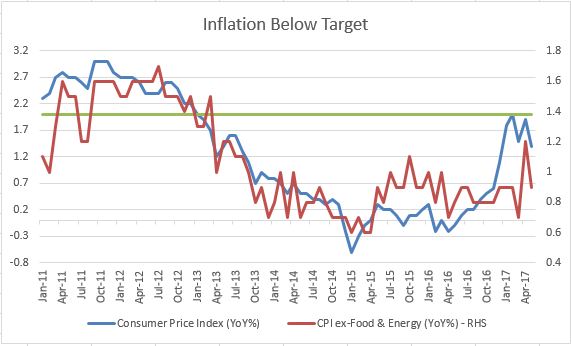 So there are two facts that we have to deal with: (i) the ECB will gradually prepare to wind down its stimulus, (ii) it will do so in a measured and deliberate manner. This means that we have time to prepare for the potential tapering.

There are a few obvious ways to play the gradual wind down of the central bank’s stimulus, and they basically involve going against what benefited the most from the ECB‘s stimulus programme since the central bank lowered benchmark policy rates in 2014: sovereign yield spreads between the periphery and the core, and equity spread trades between the periphery and the core. 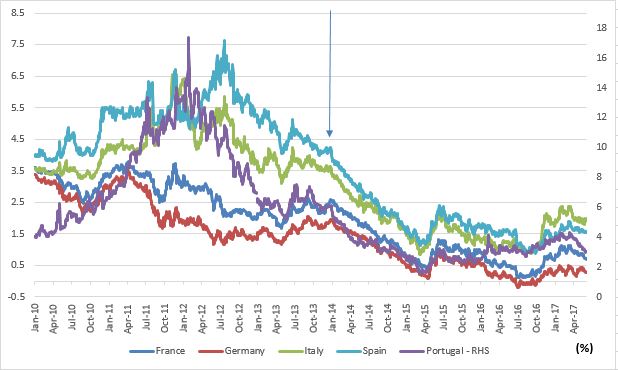 The chart above plots the 10-year sovereign bond yields of the Western European nations since January 2010, and it’s really quite clear that since the ECB whipped out safety nets in 2011 and 2012 during the sovereign debt crisis and its stimulus programme later in 2014/2015, bond yields have correspondingly moved lower, and this is a main driver of the so-called recovery that we are seeing in the periphery as the costs of borrowing remains low and credit is again generating healthy growth.

The countries that benefited the most from the ECB‘s programmes will of course struggle more than the rest who did not benefit as much when the ECB gradually withdraws support. When that really happens, I will be looking to reduce my exposure to the peripheral markets like Spain and Portugal.

Looking at market segments that would be great beneficiaries in a higher interest rate environment is also one viable way. While banks are typically the obvious beneficiary as the yield curve steepens, their share prices have already moved higher year-to-date, and earnings have not really caught up. They have not totally restructured as well (relative to their American counterparts), and some are still facing capitalisation issues, particularly those in the periphery.

One solid play is the European insurance industry. Well-known and conservatively run insurance companies will benefit as their risks for asset/liability mismatch decreases, as well as enjoy a potential boost in their earnings margins should rates in the Eurozone region move and stay higher from where they are now.

These 3 well-known players have solid balance sheets, with almost single-digit forward PE multiples (based of consensus 12-month EPS), and are positioned well for the current recovery trend in the core. Interestingly, they also trade at a discount to their book values. Additionally, all 3 offer estimated dividend yields north of 4.0%, making it an attractive core holding within an equity portfolio.

A tactical way I’m considering at the moment is to go long the Euro against the Russian Rouble (RUB) via the EURRUB currency pair. Although sentiment is now overwhelmingly positive on the single market’s currency, it’s crowded from a USD perspective (short USD long EUR). While I’m sitting on a long EURGBP position as explained in an earlier post, there is an ‘optionality-like’ feature in the EURRUB currency rate in that should energy-related commodity prices fall the RUB is likely to depreciate suddenly, simultaneously forcing pressure on the currency pair from an unwind in carry trade positions between the EUR and the RUB.

Implied volatility on at-the-money options on the EURRUB pair is at lows not seen since October 2014, before the sudden collapse of the Russian currency back then. Risk reversals on various short and long-dated options are also low at this juncture. 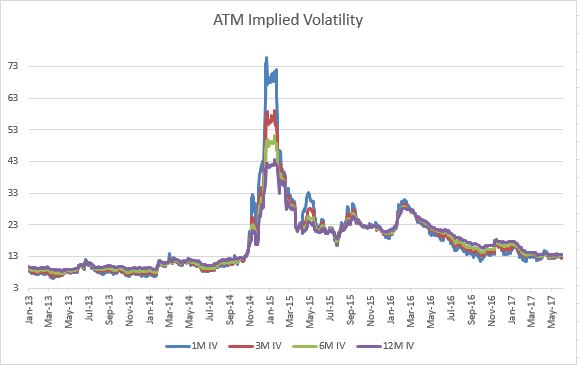 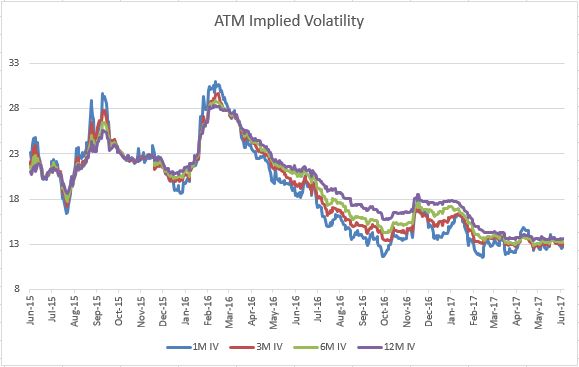 Consensus forecast is for the currency pair is for the spot rate to hit 65.02 in the third quarter and 65.78 in the fourth quarter this year. Thus, there is some form of expectation of a move higher from where we are now. This idea will only make money if the move is stronger than what the consensus expects, which means that I may have to wait for an unexpected event to shake the consensus expectation downwards first before considering a position. 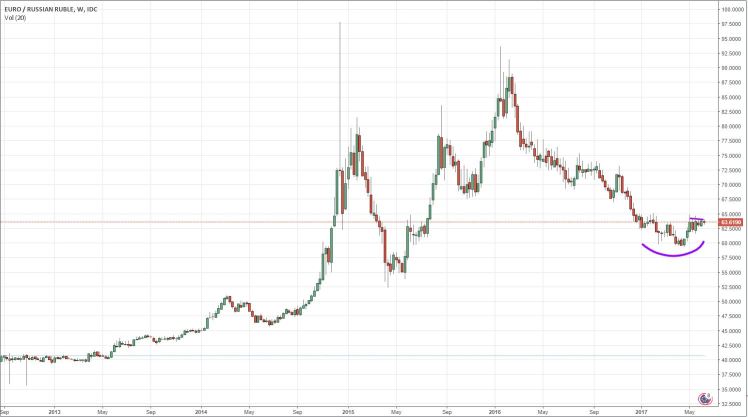 Additionally, once the ECB eventually winds down its stimulus (assuming everything goes according to their expectations), the time will come when finding inefficient, weak and highly-geared companies from cyclical sectors and betting against them will payoff, especially when the credit cycle in Europe begins to turn and the costs of credit is marginally higher. But that day is still quite far out…