French citizens are once again heading to the polls in what is arguably 2017’s most widely and closely-watched high key political event: the French Presidential and Parliamentary Elections! 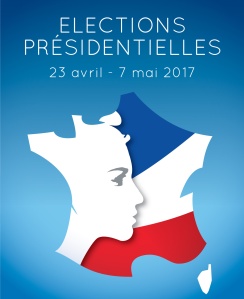 At stake? Possibly the future of the European Union (EU).

That’s because one of the potential candidates for the Presidency, Madame Marine Le Pen, is calling for a referendum of France’s membership in the EU. Needless to say, if France follows Britain’s path, then the future viability of the EU itself is highly questionable given that both Western European countries are no longer part of it. And that’s the major concern among politicians and the global investment community. 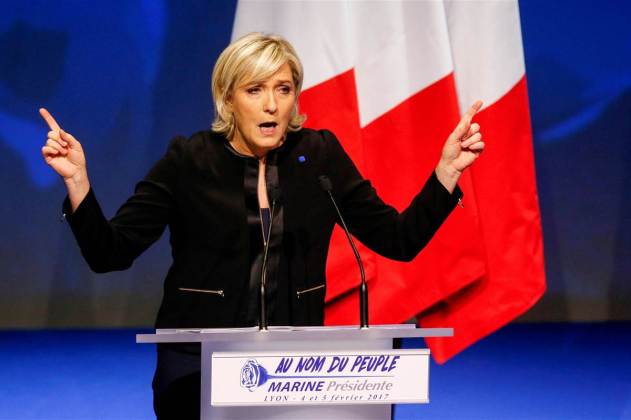 Le Pen is the head of the Eurosceptic and far-right party Front National, with the party gaining popularity in recent years following the 2008 Global Financial Crisis. She has publicly released her intended policies for France, and needless to say, it is not only nationalistic but highly-socialist and protectionist!

Scottish Investor Hugh Hendry, founder of Eclectica Asset Management, has this to say in one of his recently-released letters to his clients:

“Like everyone else we know there is an event risk that the French electorate could throw out the old political class and jeopardise the fragile equilibrium that is the European monetary system. We know the dates, we know that the result could produce considerable downside risk to global asset prices, much more so than Brexit given that the potential departure of one of the nations most fundamental to European integration would surely lead to the system’s demise, but we also know that the outcome is impossible to predict in advance.”

Hendry’s not taking any chances, and is quite vocal about hedging himself through the event:

“It is our contention that we have insulated our portfolio from such a known unknown. Success for Le Pen is currently deemed unlikely, but under such a scenario, where markets would need to grapple with the real threat of a Euro break up, our gains could be considerable. We think there is a significant probability of such a political upset, and believe our trade as detailed below offers a very attractive gain to loss ratio (5:1) should the probable path be upturned.”

Clearly Hendry sees the possibility of chaos and panic should Le Pen win, and has prepared himself.

Bloomberg has compiled composite indexes using the average of polling surveys done by OpinionWay/Orpi, IFOP/Paris Match, Harris Interactive, Kantar Public and BVA. As of the 11th of April, here’s how the situation stands:

While Le Pen and Emmanuel Macron has been neck-to-neck since early-March following Fillon’s unfortunate run-in with his past issues, Melenchon has recently crept up the polls to 18.0%, making the situation difficult to call at the moment as the election draws nearer (assuming the reliability of the polled data).

Understandably, given what has happened thus far, it’s not hard to freak out over the possibility of a Le Pen victory and its implications for France, the EU, as well as asset markets. There clearly is a tail risk event on the horizon.

However, let’s take a moment to examine the facts.

Her interests and main agenda may also be a little divorced from reality. According to data compiled by Standard Chartered, voters in France are most concerned about unemployment, purchasing power and social security:

Interestingly, Le Pen may have understood this reality, and her recent dialing down of her public “anti-EU, anti-establishment” rhetoric may be an effort to appeal to voters from the other political spectrums and present herself as a candidate for unity instead of one of harsh divisiveness that is typically associated with the far-right and Front National’s history.

The odds of her becoming president could be below 20.0% at this juncture.

Secondly, there are several hurdles to a Frexit scenario.

According to the French Constitution, only the Prime Minister or either of the chambers of parliament can initiate a referendum. Front National has very little representation in both chambers. Now, Le Pen could try to change the constitution, but in order to do so, control of the Senate is crucial. This leaves us with 2 possible outcomes: a National Assembly with a clear majority held by one of the major opposition groups OR a fragmented outcome with no clear majority…

If Le Pen wins, there could be an interim government appointed by Front National and it will stay in power until the legislative elections in June. However, it’s also very unlikely that Front National can obtain a majority in the National Assembly during this round.

There are 2 Articles in the French Constitution however, that makes the situation more complex. The constitution states that any changes to it must be prepared under Article 89, which requires either 60% and above of parliament or via a referendum held after both houses pass the reform by a simple majority. This route via Art.89 is unlikely something that Le Pen will use.

The other Article is No.11, which technically allows the president to call a referendum without the backing of the National Assembly. The National Assembly can respond via Article 49 (vote of no confidence) but it takes up to 48 hours to do so and thus, allows Le Pen some time to conduct a referendum. Article 11 was triggered by the famous WWII hero General Charles de Gaulle back in 1962 when he wanted universal suffrage for the election of France’s president. Le Pen could operate under this, although it’s debatable if such a move could be done in the current situation and context.

With this in mind, Le Pen will have to tread carefully should she win the Presidency.

Therefore, given the above, my central case is that a Frexit will not materialise. And even if she takes the hot seat of the Presidency, she’s unlikely to follow-through with what she wants to do for France, much less without causing chaos and disorder and a breakdown in political administration (which defeats the overall purpose as well).

Now, of course, I can be wrong, and like any other responsible investor, would want to possibility hedge against tail risks. A Le Pen victory is possible if the turnout rate unexpectedly collapses or swing votes occur. Unlike Brexit and Trump’s win last year however, financial markets have already started to price in a Le Pen victory and Frexit risks to a certain extent. This is because the polls reflect that Le Pen is one of the leading candidates, reminding me of PM Renzi’s Constitutional Referendum for Italy back in December 2016 (which also suggested that Signore Renzi will lose). Investors also probably would not want to make the same mistakes as they did in 2016 when they discounted the possibility of Brexit and Trump’s win.

Take a look at the following: 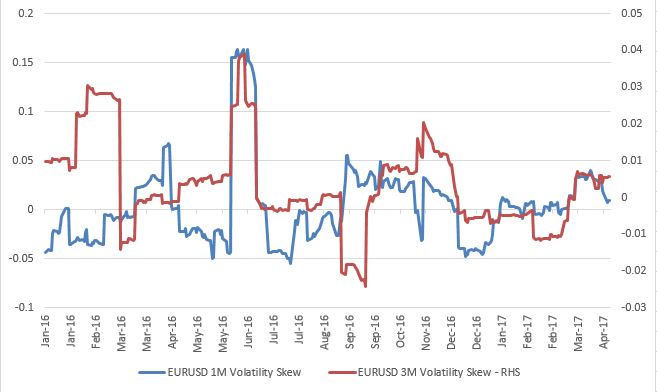 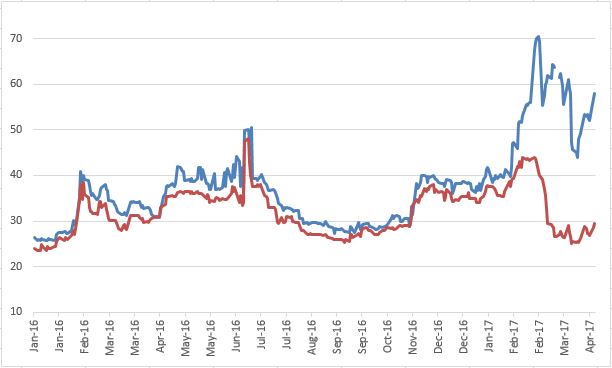 In the sovereign credit default swap (CDS) market, their definition changed in 2014 to represent “English law” issued bonds that are supposed to reflect the regulatory requirements of “bail-in” rules for financial institutions in Europe. Thus, there are 2 types of sovereign CDS on French government debt, with the other based on “local law” sovereign bonds. The French government has more leeway with “local law” sovereign bonds when it comes to restructuring. The chart above shows an example of the 2 different types of sovereign credit default swaps (CDS) on France’s government bonds. Clearly the tail risk of a Front National victory has started to be factored in as the spread between the 2 have widened since February, indicating fears of restructuring risks.

The above chart shows the spread between the yield of the 30-year French government bond and the yield of a 30-year European Investment Bank (EIB) bond. Normally, it should be negligible, but the spread has widened to above 40bps year-to-date. Clearly, the market has rising concerns that a possible Frexit could lead to France not fulfilling its funding obligations to the EIB.

And here’s the VStoxx Index, which is Europe’s equivalent of the famous Volatility Index (VIX) in the US: 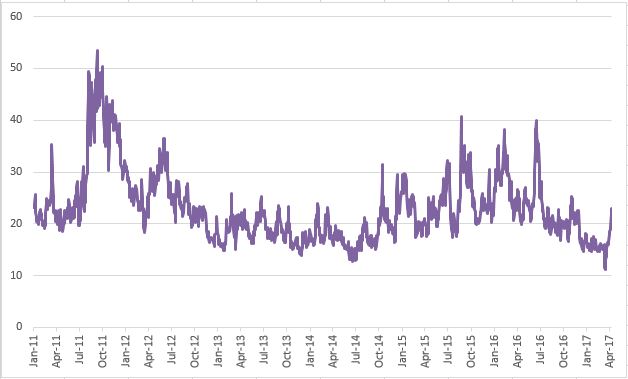 One can clearly see the market’s fears and concerns rising with that recent spike in the VStoxx.

With this developments, it’s getting difficult to find a cost-efficient and practical hedge for this market event. My own take of the situation is that a Le Pen victory/Frexit possibility is priced in to a percentage that is similar to Le Pen’s current polls. This means that market participants are still scratching their heads and watching the situation closely.

Clearly, anticipating and having a conviction on a directional view on asset classes like currency pairs with a meaningful horizon into the election rounds is really difficult given the complexity of the situation. Thus, I’m considering to go long some straddles on the EUR/USD currency pair. There’s no doubt that there’s going to be some volatility in the FX markets through this event, and using a straddle option allows me to express a directionless view and yet make money should volatility rise higher-than-expected, causing the currency to trend in either direction.

With Germany’s Federal Elections not far after the French Parliamentary Elections, and coupled with the fact of ongoing cross-channel negotiations between London and Brussels regarding Britain’s departure from the EU, there’s a ton of political headline events that can juice up some volatility in European credit spreads, equity markets as well as the global currency markets.

While I have to worry about theta eroding the value of my straddle position, I can mitigate that by getting involved with longer-term options. A long-dated option also gives time for the view to work out as long as the underlying asset price trends and moves substantially over the lifetime of the option.

With a long-dated straddle in the portfolio, it will help to hedge against long equity beta exposure I have on now at the moment…

How are you preparing for this event?